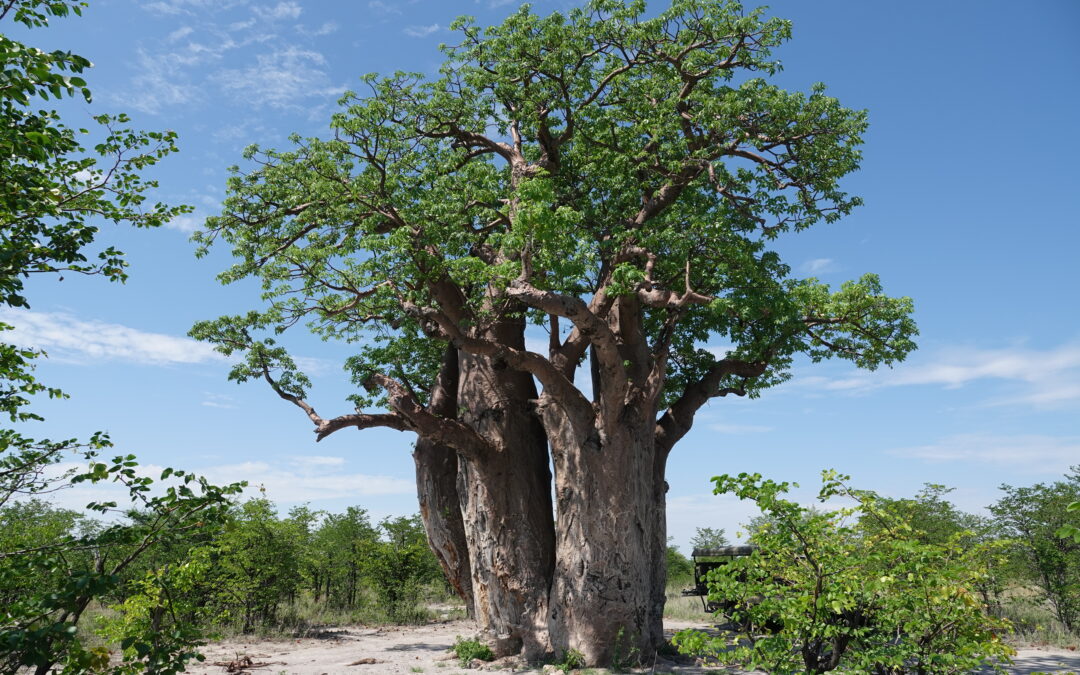 The first question we get whenever someone begins the booking process with us is, “When should I visit Botswana? Is there a best time of the year to go on safari?” It’s a good question and it depends on where you’re visiting in Botswana. The Kalahari Desert and Okavango Delta are vastly different and respond to the seasons in different ways. We recently had the privilege to experience that difference for ourselves at the end of December.

However, before we delve into our 7-Day/6-Night Kalahari Desert region experience, let’s explain why we tried it out in the first place.

Rainy Season and the Okavango Delta 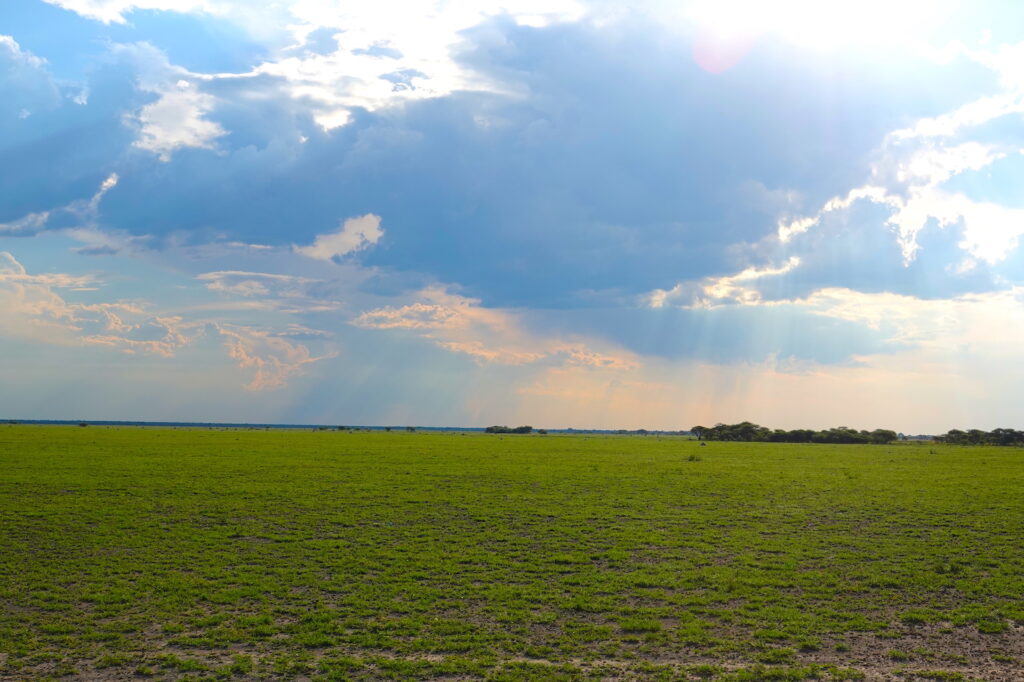 While we’re biased and don’t think there’s ever a truly bad time to go on safari, there are some months that are less than ideal. For example, the rainy season.

From December through March, Botswana becomes a water-flooded wonderland, which is essential for the eco-system of the Delta but can make your safari less enjoyable even with our ponchos to help keep you dry. The good news is that, most often, the rain is in the early morning and evening, which means midday on your all-day game drive should still be beautiful weather.

The main problem with the rainy season is that some sections of the Okavango can become impassible. For example, we cannot offer our typical 10-day safari during the rainy season because the road to get to Savuti is underwater. Instead, we mix it up with more time in Moremi and Khwai.

To combat this rainy season problem, our team wanted to try out something totally different. We decided to test out a new route with three camps around the Kalahari Desert area: Nxai Pan, Makgadikgadi Pans, and Central Kalahari.

Brave Africa and the Kalahari Desert 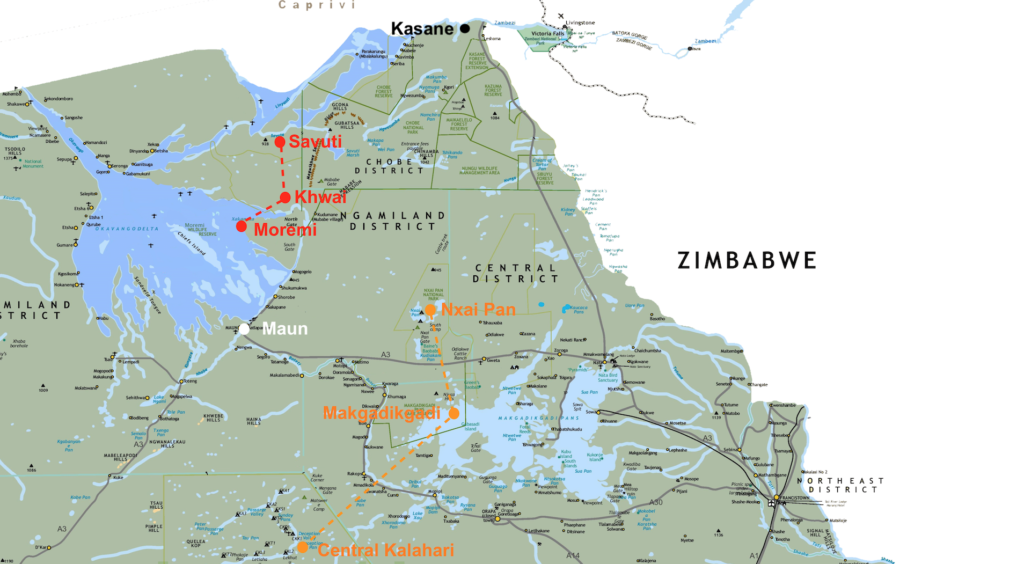 The Red Route – Inside the Okavango Delta

For our typical route (the red dots), you would take a bush flight from the airport (Maun or Kasane) to either Savuti or Moremi to begin your safari with us. We would then drive you along the red route (north or south) until you spent three days at each location and really gained a taste of the Delta.

However, as we explained above, Savuti is disconnected from Khwai and Moremi during the rainy season (December – March), so we’re limited to a smaller area of the Okavango. It’s still a great experience since that area is so incredibly wildlife dense, but for some guests, it can be disappointing not to visit Savuti and Chobe National Park. 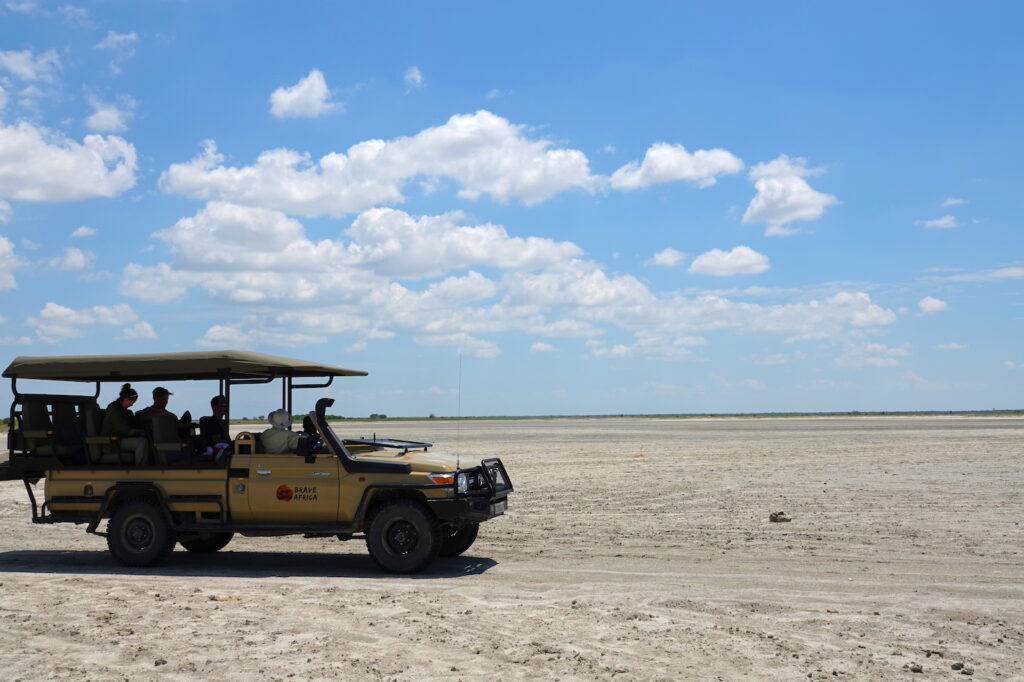 That’s why we decided to try out a new southwestern route, which we’ve outlined in orange: Nxai Pan, Makgadikgadi, and Central Kalahari.

As you can tell right away, this is a much different region of Botswana and that offered quite a surprise for our team. Because of its very dry landscape, the rainy season is actually peak season for these areas, and we had hoped it would offer our guests an exciting alternative to the Okavango Delta without the rain. And that was definitely the case.

During mid-December, when heavy rains hit Maun and the Okavango, we remained fairly dry on in the Kalahari area—only enjoying one amazing thunderstorm. So, the area definitely passed our test for dryness.

However, in the end, it’s not a route we’ll be offering Brave Africa guests any time soon. While there were many things to love, there were also many negatives that we felt would detract too much from a quality safari.

Here’s what we discovered: the good and the bad.

Mobile Safaris in the Kalahari: the Good and the Bad

So, what was it like to go on a mobile safari in the Kalahari region? It was very different from the Okavango in both good and bad ways. Unfortunately, by the end of the trip, we felt the negatives outweighed the positives, at least for us, and here’s why.

Our favorite aspect of visiting the Kalahari region was getting to see unique animals that you don’t find in the Okavango. For example, instead of Impala everywhere, we were overwhelmed with Springbok and Oryx (Gemsbok). These are desert-dwelling antelope that you won’t find in wetter areas. We also saw a ton of Steenbok (the smallest antelope) and even some Red Hartbeest. 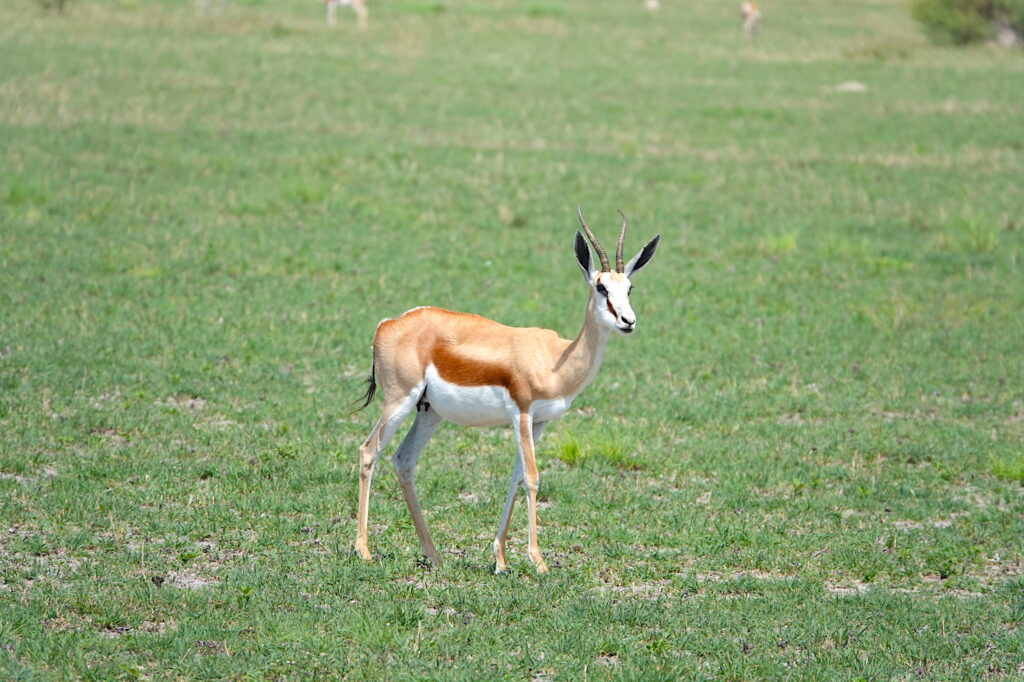 On the predator side, these areas are also a haven for black-backed jackals, bat-eared foxes, and highly rare predators such as Brown Hyena. For birds, there are Kori Bustards (the largest flying bird) everywhere, as well as various eagles and hawks and vultures.

This was all very different from what we were used to in the Okavango, which made it exciting. 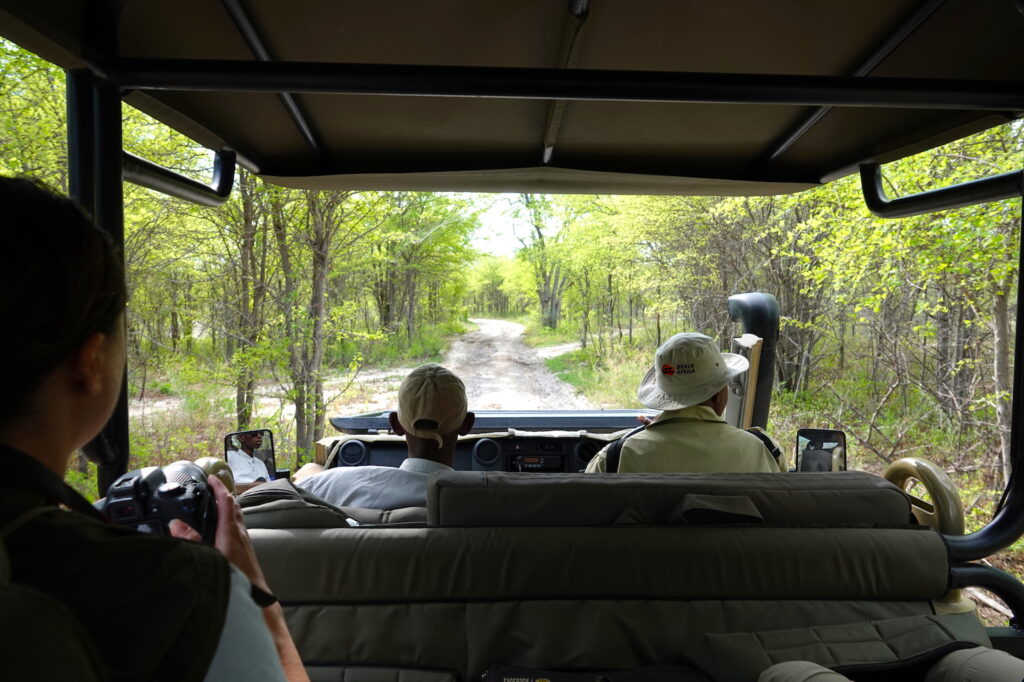 As easily evidenced via the map, going on a mobile safari in the Kalahari area requires a lot more driving between camps. On camp move days, we had to travel over 100 km to get to our next camp and much of that travel was on roads.

This meant that, as a guest, you would not be able to enjoy an all-day safari on camp move days. Instead, you’d be stuck spending a good four to five hours on a dirt road, driving at 50 km/hour, waiting to get to something you can see and enjoy.

The driving between camps was not only taxing on our guests, but it was incredibly difficult for our staff. Trying to get all of our ultra-luxury camp supplies to the next location in time and safely was a chore. 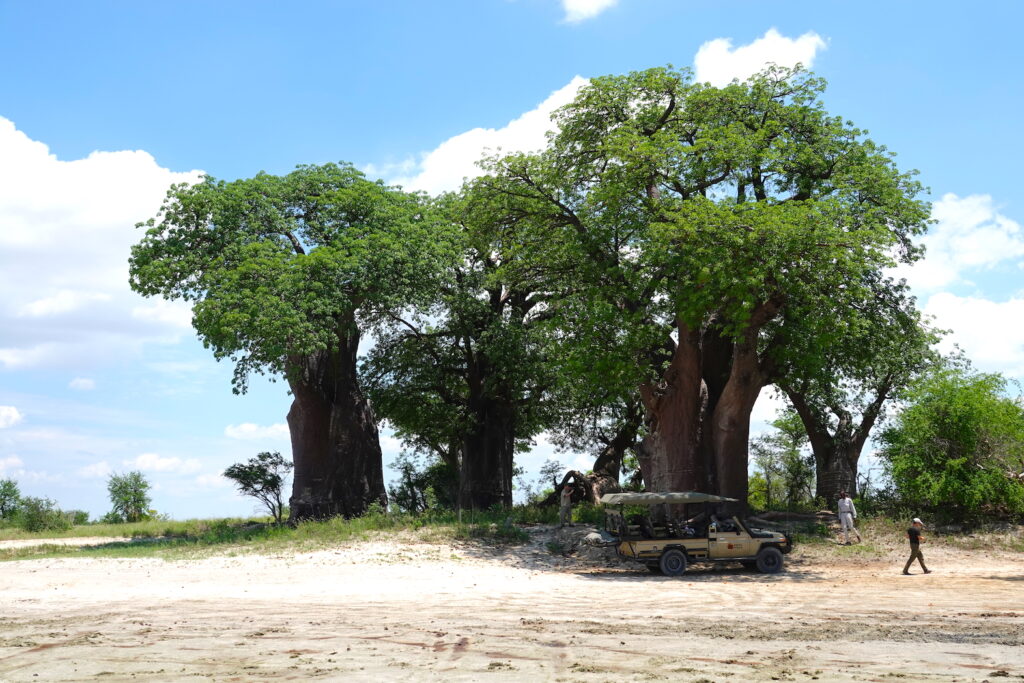 Every day on our 6-night safari in the Kalahari region, someone in the Land Cruiser would say “Wow!” when it came to the scenery. We were all so used to seeing rivers, Mopani forests, and sweeping grasslands in the Okavango, that to see desert salt pans as far as the eye could see was something else.

There were a few areas, such as Baines Baobab, that literally took our breaths away. It felt like we were on a completely different planet. It was hard to imagine things living in such harsh but beautiful landscapes, and we thoroughly enjoyed the scenery.

In particular, we all loved the many Baobab trees, which could be found throughout Nxai Pan. Every time we saw one, we had to stop and enjoy its beauty, shade, and majesty. 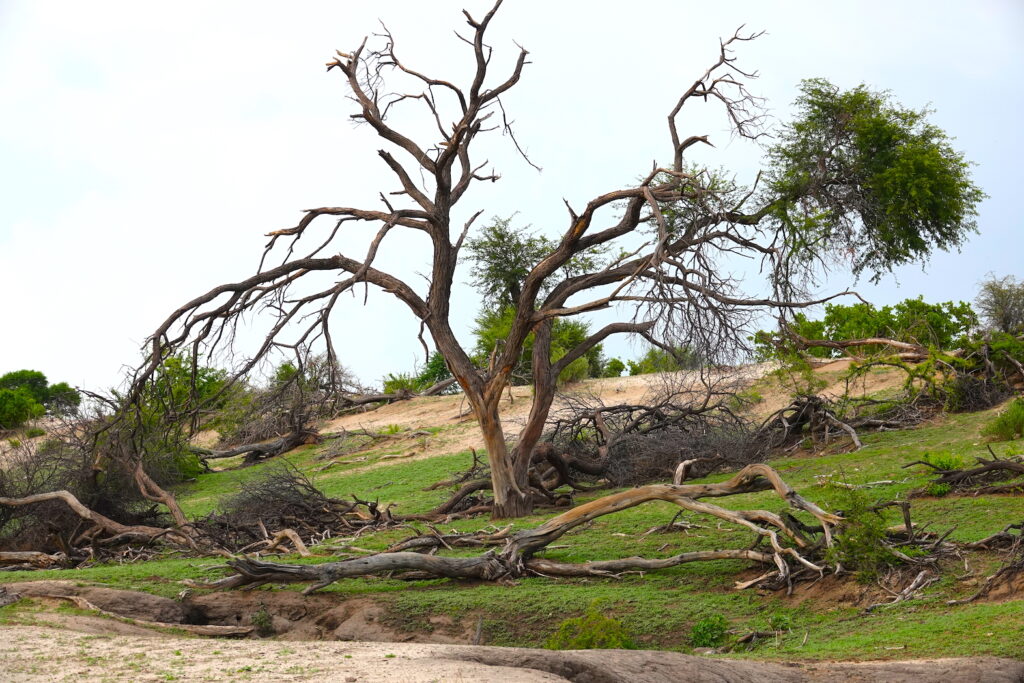 If you’ve ever taken a Botswana safari in the Okavango, you know that animals are everywhere. You won’t be with lions, leopards, or wild dogs constantly, but there’s a fairly regular stream of antelope, elephants, buffalo, wildebeest, and more. You won’t go more than an hour without seeing something in the Delta.

In the Kalahari, there were times that we drove for hours and hours without a single sign of wildlife. No birds, no antelope, nothing. The peace was incredible. We were seriously on our own for hours at a time, but if you’re going to Botswana to see the animals, this area could be fairly disappointing.

For example, in our seven days on safari, we only saw elephants twice and we only ever saw Bulls; we never saw a breeding herd. And in Makgadikgadi, it’s unfortunate to say, but we saw more corpses and livestock than Botswana wildlife. 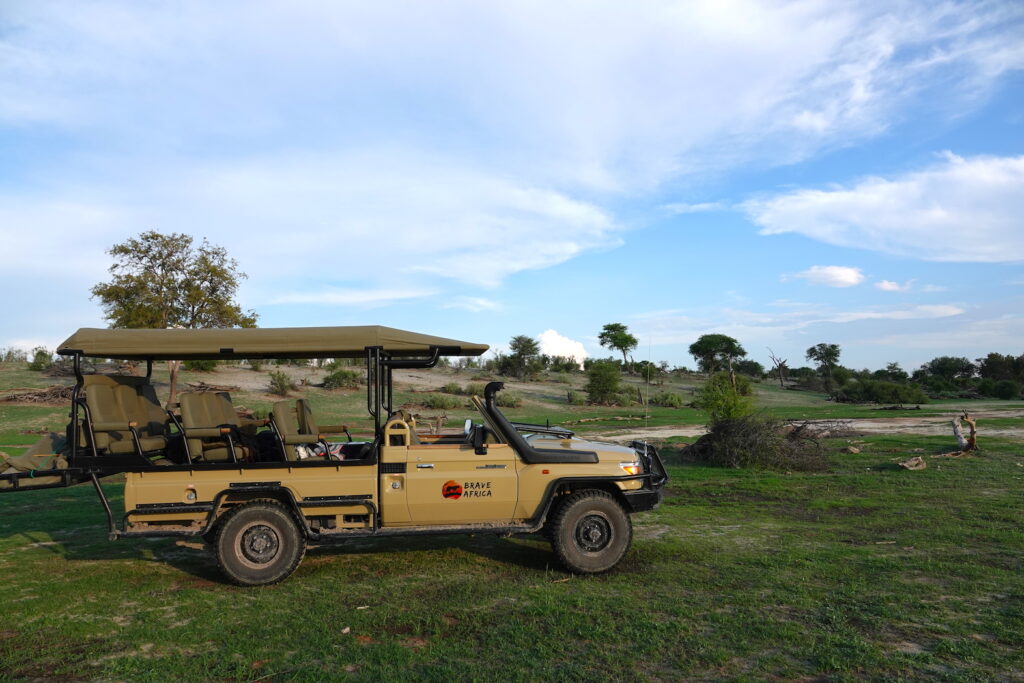 If you’re looking to get off the beaten track, the Kalahari region is the area for you. In both Nxai Pan and Makgadikgadi we rarely, if ever, saw another car. We were alone in the parks and able to explore as much as we wanted without having to worry about any other camps or self-drive vehicles.

Central Kalahari had more camps, but still far fewer than you’ll have in the Okavango. We still went hours without seeing another soul.

There’s hot and then there’s hot. Imagine 35 degrees Celsius (95F) with no shade around, no water to cool things down, just unrelenting sun and heat. There were times that we didn’t stop for lunch until 3 pm because we couldn’t find a single tree tall enough to offer shade to eat.

At least in the Okavango, there’s always a river, marsh, or watering hole nearby to offer a reprieve from the summer heat. In the Kalahari, you have to be willing to brave locations where there’s not a single plant above waste high for as far as the eye can see.

Going on Safari in the Kalahari Desert – Final Thoughts 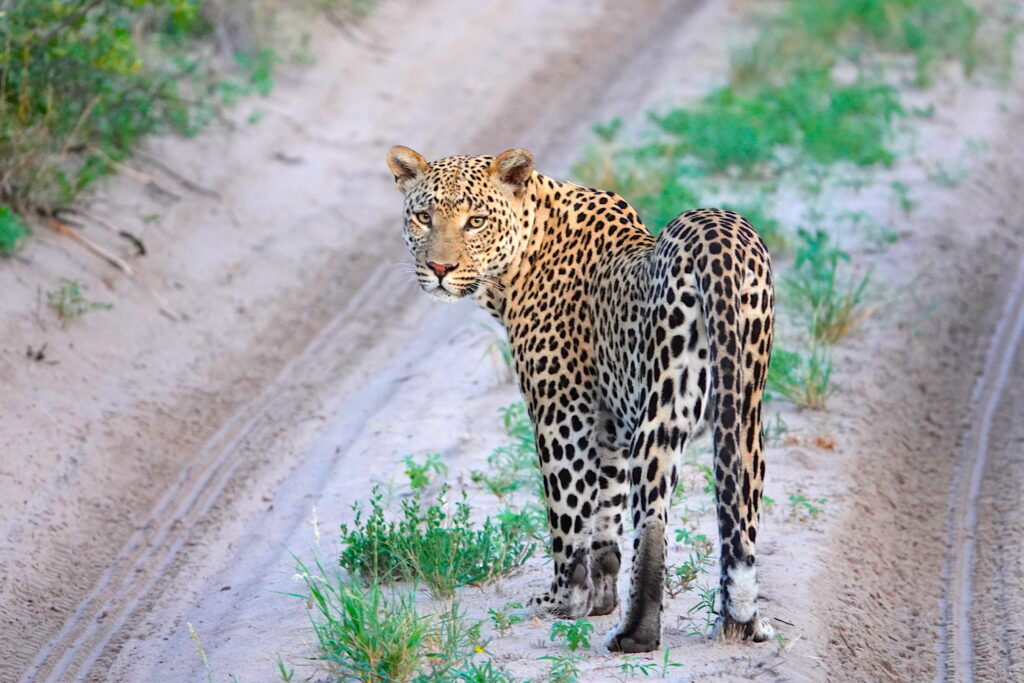 In the end, while we enjoyed our time on safari in the Kalahari region, it is not a location we think our guests would enjoy as much as the Okavango. For first-time safari-goers or safari enthusiasts who are visiting Botswana for their first or second time, the Okavango Delta is a much better choice. There’s more diverse wildlife and denser populations of wildlife.

However, we definitely recommend that you take the time to visit a camp in the Kalahari region and spend two-to-three days exploring. The pans should not be missed and there are many great camps in this region where you can fly in and fly-out before joining up with Brave Africa for the remainder of your safari in the Okavango.