On Safari in Botswana with Brave Africa: Wild Dogs Hunt at Camp 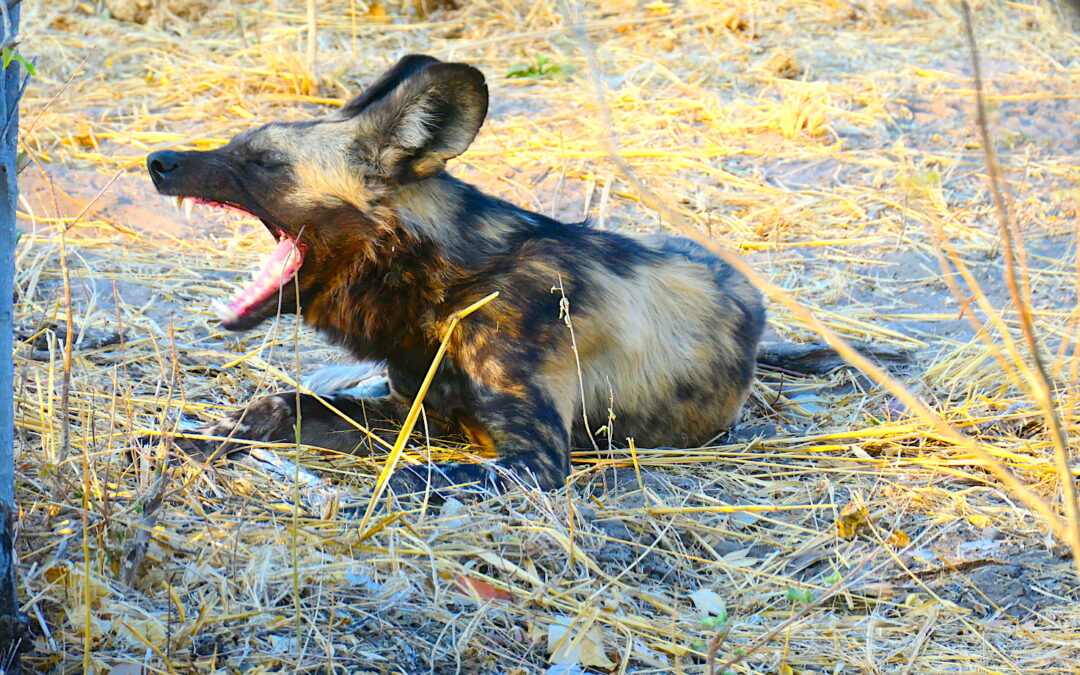 On a safari in Botswana in Brave Africa, there’s always something new to experience. We never know what we’re going to see on a game drive, but we know it’s always going to be something exciting as long as we’re open to the possibilities. This time it was a pack of wild dogs hunting.

On our most recent trip out to Xakanaxa (Moremi Game Reserve), even our staff got to join in on the excitement when at least two-dozen wild dogs, including four puppies, hunted an impala at camp. 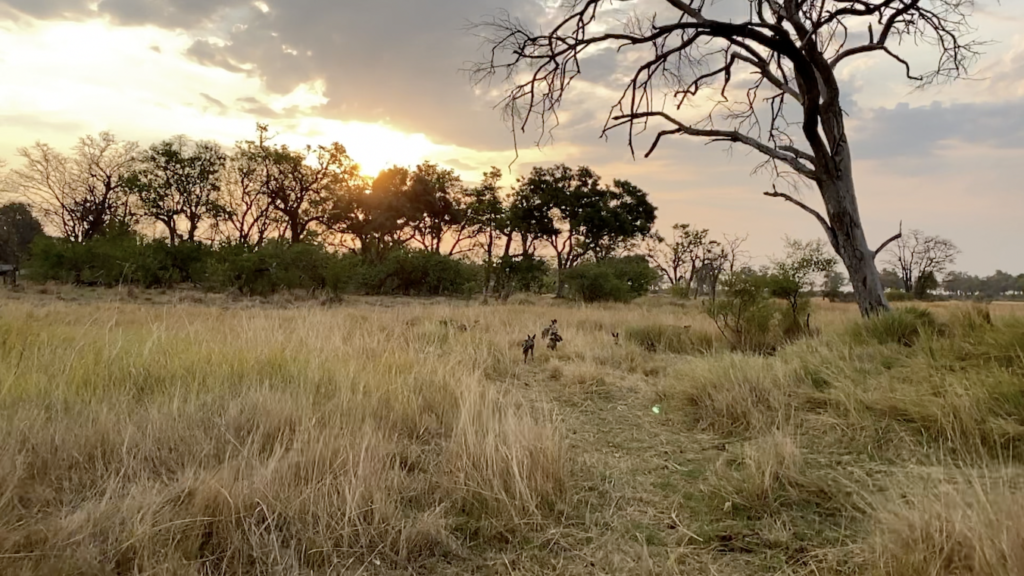 Wild dog pack of about two-dozen dogs hanging out at the Brave Africa camp in the Moremi Game Reserve.

After a wonderful all-day game drive, Wina and our guests were heading back to camp for dinner when they ran right into a huge pack of wild dogs. We were barely a hundred meters from camp. You could see the staff tents, our moving trucks, and the main tent, and yet right there in front of us, there had to be about two dozen wild dogs all walking along in the setting sun, including four puppies—around six months old.

They had just woken up from their afternoon nap and were on the hunt.

With a pack that large—more than twenty dogs—hunting enough food for everyone is a challenge. The pack has to kill multiple times a day to stay healthy, and that can be especially difficult with pups. The pups always have to be protected, but they also have to learn how to hunt, so it’s a fascinating balancing act.

When we first came upon them, the pack was slowly meandering along. They were spread out and looking for food, but nothing urgent. The pups were toward the back, bouncing along, with assigned minders to make sure they kept up and didn’t get into too much trouble. And the rest of the pack was in formation, looking for prey.

Then, between one moment and the next, everything changed. 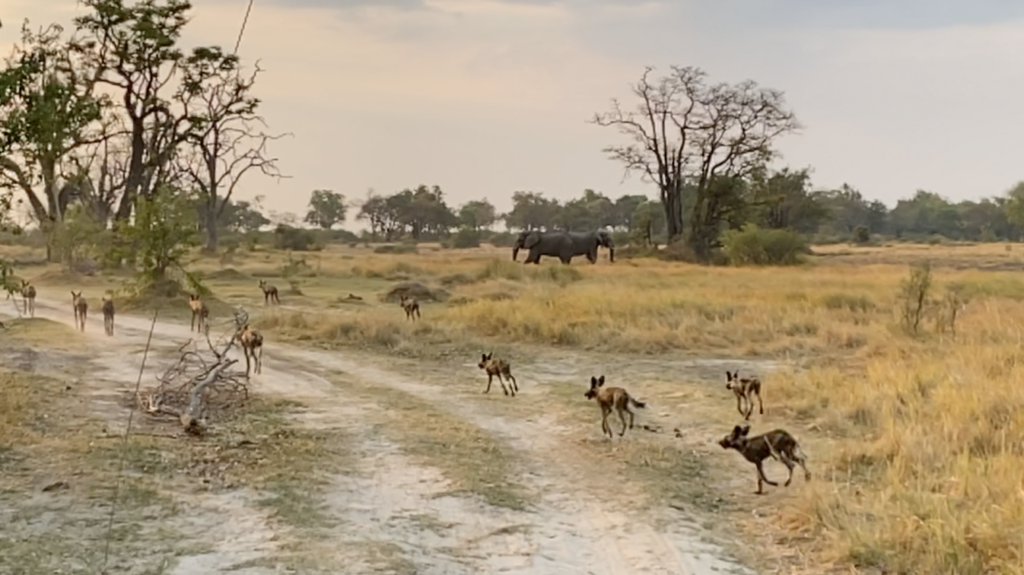 Suddenly, we heard some high-pitched squeaking. It was the dogs sending out a warning call about nearby prey. It seemed like we blinked, and then there was an impala on the move.

She was in the wrong place, at the wrong time. No lone animal would stand a chance surrounded by more than 20 hungry dogs, and neither did she. While she leaped and ran as fast as she could, she wasn’t fast enough.

Only a few of the pack actually went to the kill site, the rest stayed back with the puppies, and so did we. The puppies didn’t have the energy to keep up with the adults on the hunt, and we didn’t have the speed, but in this case, waiting behind was not a problem.

While we didn’t witness the kill, a few minutes later, we saw something just as special. 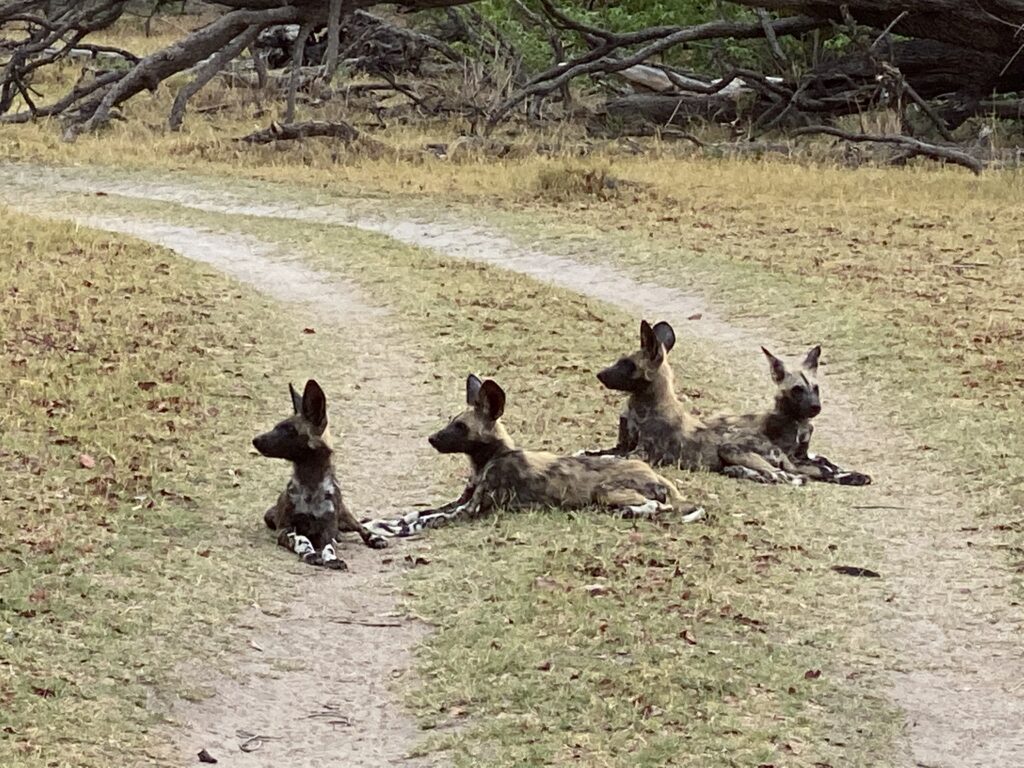 Four wild dog puppies waiting for the adults to come pack with food.

Wild dogs are incredibly social creatures. They are all about the pack. No dog is left behind, and every pup is well cared for, and we got to witness this first-hand.

Since the puppies were too young to hunt, the adults brought the kill to them. No, they didn’t drag over the kill like lions would do. They also didn’t force the puppies to move to the kill site—that would be too dangerous. Instead, the adults took turns eating and regurgitating food for the puppies.

That’s right. We got to witness wild dogs vomiting pre-chewed and swallowed food so the puppies could enjoy.

It was ADORABLE. And no, we’re not joking. 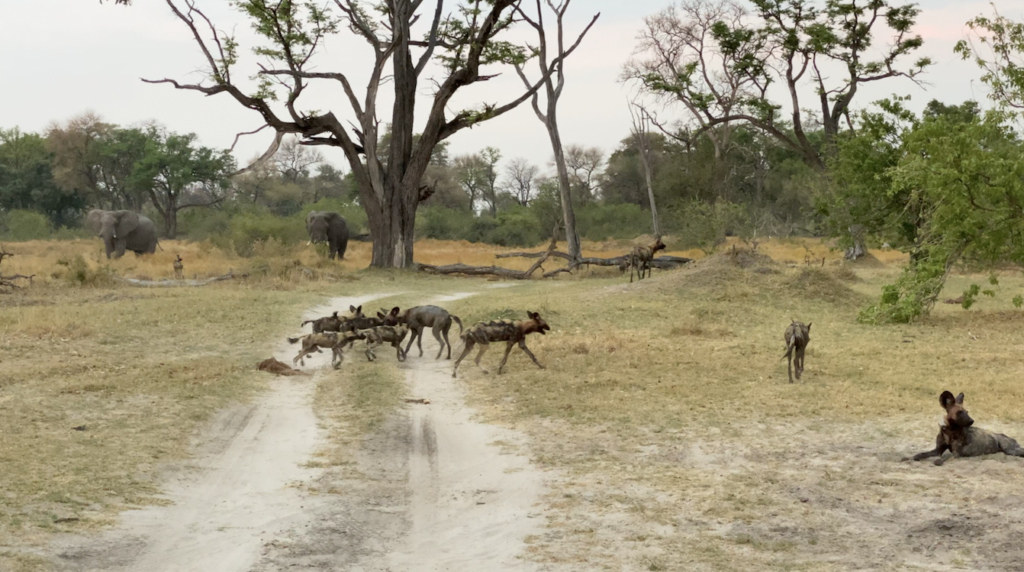 It was astonishing to see the family dynamics. The four puppies stayed together, and every time an adult came back from the kill site, they immediately went up to the puppies and regurgitated enough for a meal.

The puppies squeaked and squealed and ate their dinner happily until the next adult would come back. They did this over and over again until the puppies were full, and the kill was demolished.

All the Brave Africa staff came out to watch the wild dogs hunt. You can see our main “mess” tent on the far right with our staff tents and moving vehicles on the left.

For some of our Brave Africa staff, it was the first time they’d ever seen a pack of wild dogs. While they’re out in the bush regularly, they mostly stay at camp. This means they’ve all seen elephants and various antelope, but predators are always rare, and they’re especially rare if you remain at camp and don’t go looking for them.

This time, the staff didn’t have to go on a game drive to experience something that is incredibly rare and exciting. All they had to do is stand at the edge of camp and watch. It was thrilling, and something we’ll be talking about for years.

Watch the wild dogs hunt for yourself!